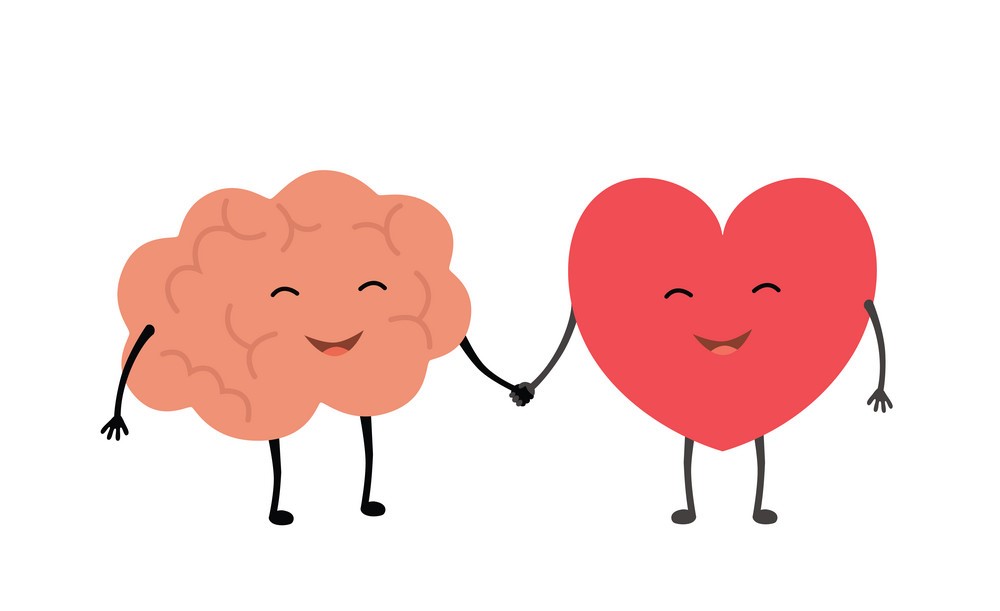 The economy is based on a rationally minded consumer. But the last few decades have given us sufficient insights that consumers in many cases not act rationally. Since the 1980s and 1990s, more and more evidence of this has been provided by psychologists. However, these psychological insights are still far from being applied within marketing and sales departments. In this article I want to give you an insight into some groundbreaking research in economic and consumer psychology and how you can use it in practice.

A good example that shows that people do not always act rationally when it comes to money is the Ultimatum Bargaining Game. This is a two-player game in which one of the two players divides money; Let’s say 10 euros. The other player has the choice to accept or refuse the offered amount. If the bid is accepted, the money is shared as offered. If the bid is rejected, none of the players get anything.

Consumers not always rational
If you’re a completely rational player, you’ll accept any bid. Also a bid of 0,01 euro. One penny is more than nothing. In reality we see that nobody accepts such a bid, because we don’t think this is fair. Usually people make an offer around 50/50 and they refuse low bids.

1. Prospect theory
In 1992, psychologists Daniel Kahneman and Amos Tversky developed the prospect theory. Kahneman won the 2002 Nobel Prize in Economics for this, but his partner Tversky did not, because he died in 1996. This theory states that people who can make money don’t take risks and people who can lose money are more likely to take risks. They indicated this by means of a series of scenarios in which people could win or lose money. By way of illustration

In such a situation, most of the people seem to choose option A. Because option b is a situation in which people can lose money:

Here, people mainly choose option B, in which they take the risk of losing 200 or nothing rather than losing 100 euros. The graph below shows why people act differently in both situations. On the x-axis, you can see the objective value (money) and on the y-axis the subjective value (how much value you attach to the amount). 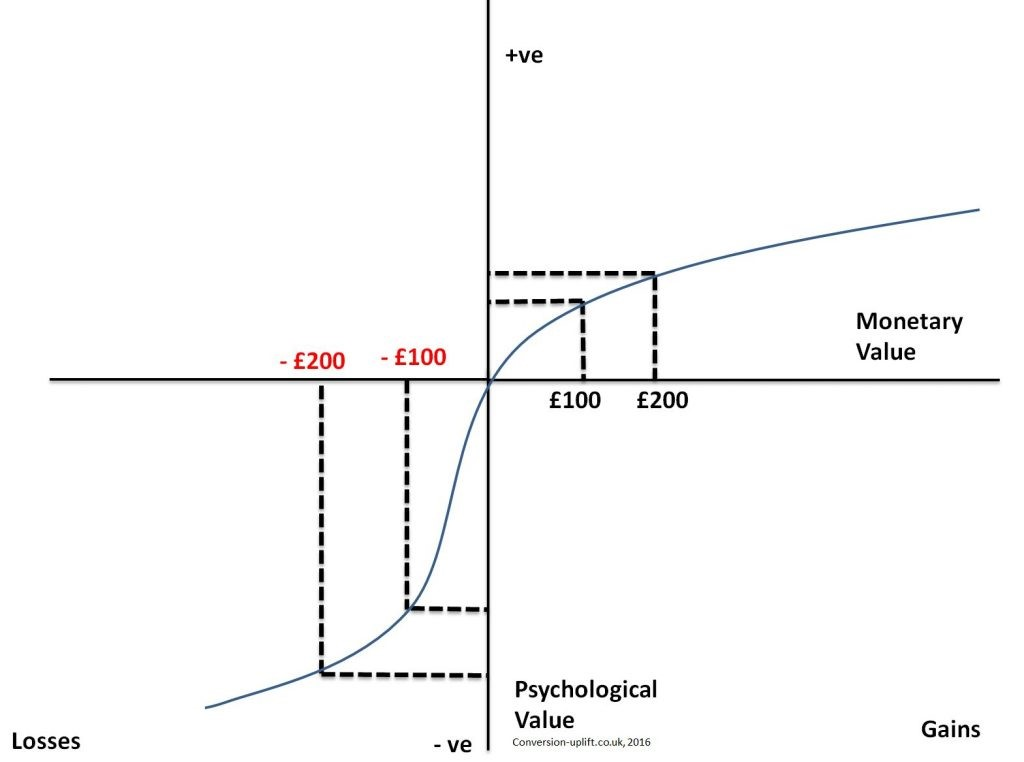 The graph also shows that the extra value we attach to €200 compared to €100 is not twice as great, and is consequently not worth the risk of moving from 100% security to 50% security. In the lose situation, the average subjective value of €200 loss and no loss is better than the certainty of losing €100.

A practical implication for the marketing department is to emphasize what the visitor misses if he doesn’t choose product X, instead of focusing on what he gets in return.

2. Endowment effect: we don’t want to lose what we own
The endowment effect means that we value our possessions more than the things we don’t own. This effect can also be explained by means of the prospect theory. If you can trade a product that you own for another product that is just as valuable, then we usually choose not to trade. Because we attach more value to our own possessions, an equal exchange actually feels like losing.

But how do you apply this if the consumer is looking for a product and does not own anything yet? This anecdote explains how sellers apply this mechanism.

It was during the autumn holidays in (name a typical place in your country) when I had just turned fourteen. I went to (name a city ) with my parents and sister for a day and I was allowed to pick out a birthday present. At our house in (name a city) there was a beautiful mountain bike path in the woods, so I wanted a brand new mountain bike. In the bike shop my eyes were immediately fixed on a metallic-grey Giant. After having pressed the brakes 25 times, the salesman asked me if I wanted to ride it for a testdrive. I cycled 10 laps over the parking lot behind the shop and was immediately sold. This was my bike!

By letting me hold the bike and make a test ride, I already considered it partly as my property, so I didn’t want to say goodbye to it anymore. The car dealer also applies this strategy by offering test drives.

Example with shares
The endowment effect ( cherishing ) also occurs to people with shares. When the values of shares are at a loss, people have trouble to sell the shares. This is because we give a higher value to the shares we own.

The same applies to shares rising in value. We tend to sell these too quickly. If our shares are at a profit, we tend to give them more value because it’s our property, then we consider the profit on which they are at an excessively high level and generally sell too quickly.

3. Mental accounting
Mental accounting is a process whereby economic results (profit or loss) are categorised and evaluated. Research by Thaler (1999) showed that in certain situations we prefer to add up profits and losses and in other situations we prefer to process the amounts separately. Also in this case, the prospect theory can be used to explain these mechanisms. There are a few examples of situations to explain the preferences:

B: You have won €75 with one lottery ticket.

B: You will receive one letter from the tax authorities stating that you have to pay €75. In this situation we prefer option B, because the subjective value of an integrated amount is less negative than two amounts to be paid.

Practical implications
The lesson you can learn from the first example is that you should seperately name the ways of saving money by choosing your product. “If you choose product X, you will save €… on Y and €… on Z.”. If the focus is on making costs (example 2) then you need to integrate the costs: “For product X, you only have to pay €15 a month to pay for the device and the subscription.”

4. Disjunction effect
Research by Shafir and Tversky shows that consumers have a strong preference for certainty. Often we only dare to make a choice when we are sure of something, even though the outcome is not relevant to the decision.

2 scenarios
Bastardi and Shafir demonstrated the disjunction effect in a study in which people were shown one of the two scenarios below:

You recently decided to buy a new CD player and this week there is a 50% offer on the product you want. But the offer is only for today.

1. However, your amplifier is broken and the warranty has expired, the repair costs are €90. Are you buying the CD player?

2. Your amplifier is broken, but the repairman must first check the date of the warranty. You won’t know until tomorrow if the warranty is still valid, or if you will have to pay €90. Are you buying the CD player today?

Don’t you buy the CD player?

Will you wait until tomorrow?

The table shows that in the second scenario, 69% ( 29% + 40%) of people chose to have the guarantee checked, and then 40% of the total number of people decided not to buy the CD player.

The result of the uncertainty was that 45% of the people did not buy the CD player, whereas that was only 9% in the scenario in which people had security. The disjunction effect shows that consumers who do not have all the information available, even if this information doesn’t affect the decision, tend to be more indecisive.

Removing customer uncertainty
It is a complicated phenomenon to respond to, because people tend to look for information that is not present. Of course, this can vary from person to person. My advice is therefore to be as open as possible to the customer and to offer the possibility to have customers ask questions in an easily and accessible way. But keep in mind that every strategy to remove uncertainties from the customer is beneficial in terms of the disjunction effect.

5. Choice-overload: can you have too many choices?
The ideology of our Western society is based on the fact that increasing our well-being is linked to increasing our freedom. After all, freedom is good, valuable and offers every individual the opportunity to act the way he or she wants to.

The way in which we increase individual freedom is to increase choice. As a result, increasing choice has become linked to increasing our freedom. This is the line of thought of Barry Schwartz, whom he introduced in 2000 under the title The tyranny of Choice. Research by Iyengar and Lepper (2000) shows that more choice does not always lead to more satisfaction and willingness to buy.

People did show a strong preference for the possibility of having a lot of choice. The paradox, however, was that people with less choice made a purchase earlier and were more satisfied with their choice. Regret plays an important role in this, because more alternatives increased the degree of regret.

6. Complex novelty
Research by Noorderwier and Van Dijk looks at the communication of product innovations. Many companies introduce a new product to the market by labelling it as brand new. However, the researchers show that product innovations are more successful if they are presented as: “comparable to” or “works just like”.

People must have the idea that they can handle the product. If people have that, the interest in the product also increases.

7. Copycats
By copycats, we mean brands that try to benefit from the name and reputation of well-known brands. It is often a cheaper version of, for example, Coca Cola or Starbucks.

This is because the number of words is a characteristic that is difficult to judge without an alternative. A dictionary with a torn front is always noticeable. An implication of this is that in the separate evaluation it is sometimes better to give less information (such as torn front). It may also be wise to give a percentage indication of the average in the separate evaluation. Think about it: “This processor performs 30% better than the average processor within this price range”.

What to do with all this research?
The aim of this story is to provide more insight into the irrationality of today’s consumers. Psychological research is often a tangle of situations to which effects are subject. The economy generally has little need for this because there are no formulas to stick to it. Only when it can be demonstrated that behavior is predictably irrational can it be used in the economic field.

The studies I have explained above show with robust results that the consumer does not always act rationally. The predictability of irrationality makes it possible for marketing and sales departments to respond to this. Therefore, take a good look at whether these studies could be relevant to your company or organization.

Get monthly advice from our experts in your inbox!

Do you want to get more out of the future of your company?

Livechat on your website or your emails helps potential
customers to convert to buying ones.